A chat with Jackie Kai Ellis

In my line of work I get to visit amazing people, their gastronomical world, passions, homes, and of course their Lacanche experience.

Recently I traveled to France to meet writer, pastry chef, and designer Jackie Kai Ellis at her Parisian home. After reading her touching memoir and following her beautiful feeds on Instagram, I was excited to meet her in person. On a sunny afternoon we gathered in her kitchen for some cooking, chatting, and eating her exceptional pasta dish on the balcony.

“It takes three days to make the perfect croissant!” – Ellis replied when I asked if I could film her making one of my most beloved morning pastries. She knows what she is talking about. Trained in a Parisian pastry school, she has mastered the art of French patisserie baking.

After graduating from pastry school in 2012, Ellis opened the sought after Beaucoup Bakery in her hometown of Vancouver, BC Canada. After five years she sold it to her apprentices and moved back to Paris for good.

Although there was a time when Ellis was obsessed with nailing the recipe of a perfectly crisp, buttery, croissant, she has lost the will to spend three days around the range, at least for now. Instead of croissant making, we settled on pasta. 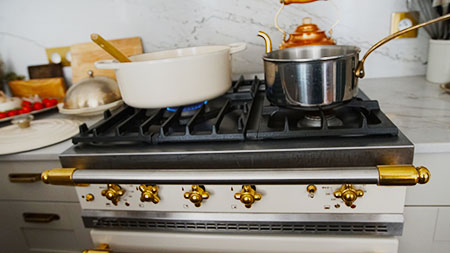 As she starts chopping the onions I ask her about the recipe she is about to make. “You know those caramelized onion flat breads from Provence? I thought I’d make pasta based on that, but instead of olives, I’ll use capers.”

The original recipe from Provence is called pissaladière.

As she cooks, Ellis points at the browning onions, “here is where all the flavor is, you have to keep an eye on it, stir it, and let it cook on low heat for 20-40 minutes, depending how many onions you have.”

When I inquire about her experience with the range, she says, “The Lacanche creates a good amount of heat so you can sear things really well. It’s a super powerful machine.” Soon enough the apartment fills up with the aroma of caramelizing onions and fresh herbs. On the avenue outside, the constant sound of construction does not distract us from the pot. 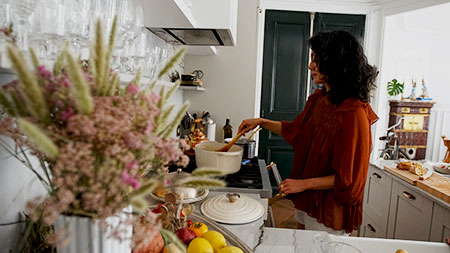 Ellis’s fascination with Paris was part of a journey of self-discovery and healing after a painful divorce. She talks about that boldly and openly in her best selling memoir “The Measures of my Powers, a memoir of food, misery and Paris”.

The title of the book is inspired by a writer she admires, M. F. K. Fisher, one of the pioneer female food writers who is considered an American classic, with books such as How to Cook a Wolf and The Gastronomical Me. “Her words are so incredibly precise”, she says of the author. 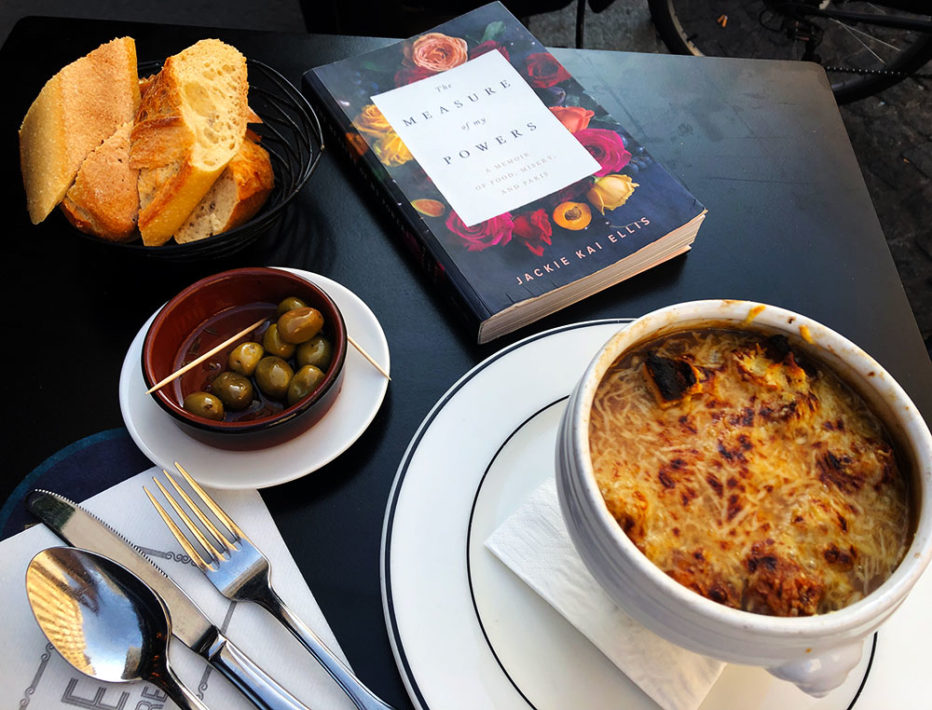 Ellis’s formal education was in fine arts in Toronto and her first career was as a designer and creative director. It was her love of baking that inspired her to shut down her design firm in Canada and learn how to be a pastry chef in Paris. She then returned to Canada to run her own successful bakery, and after selling it she started a pastry tour company in the French capital. At that time she also traveled the world and wrote about food and her journeys. The decision to settle in Paris for good was followed by buying a home in the city and renovating it. Along the way she found time to write her memoir where the meaning of food takes central stage.

Food is what nourished Ellis through and then out of her crisis. Her appreciation for making and enjoying good food is manifested in the recipes sprinkled throughout her book. Some of these recipes like Passion Fruit Baba Au Rhum and Summer Truffle in Puff Pastry with Corn Coulis and Popcorn, require passion, patience and perseverance; the three P’s for fine slow cooking.

Back in her kitchen, she prepares the side dish that was not far behind in its originality, combining fresh pluot (a juicy hybrid of a Japanese plum and apricot that is less acidic than regular plums), pecorino cheese, and dark prosciutto. She bathed it all in a good gulp of olive oil. 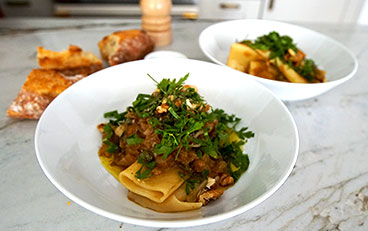 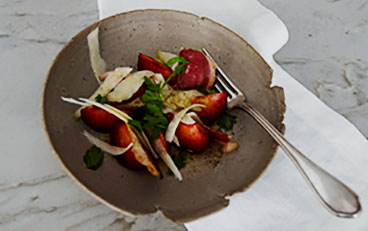 When the pasta is ready, she tosses it with the onion mix, and sets her creations on the balcony for us to eat and gaze at the action in the bustling avenue below us. After all, this is Paris, and watching it from almost any angle is a welcome affair for Francophiles like me. 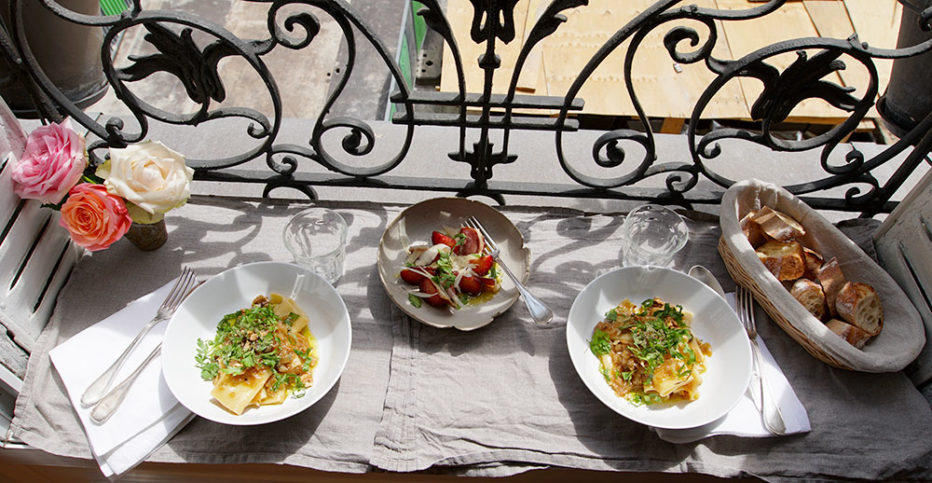 The pasta resulted in a delicious mixture of flavors with the sweetness of the caramelized onions and the golden raisins, the saltiness of the anchovies and capers, the earthiness and crunch of the crushed walnuts. The side dish was a refreshing companion.

These days Ellis tells me she cooks only for pleasure. Her new business is based on her striking but simply designed apartment, www.aptlafayette.com, “a platform that promotes enduring beauty”, she says. 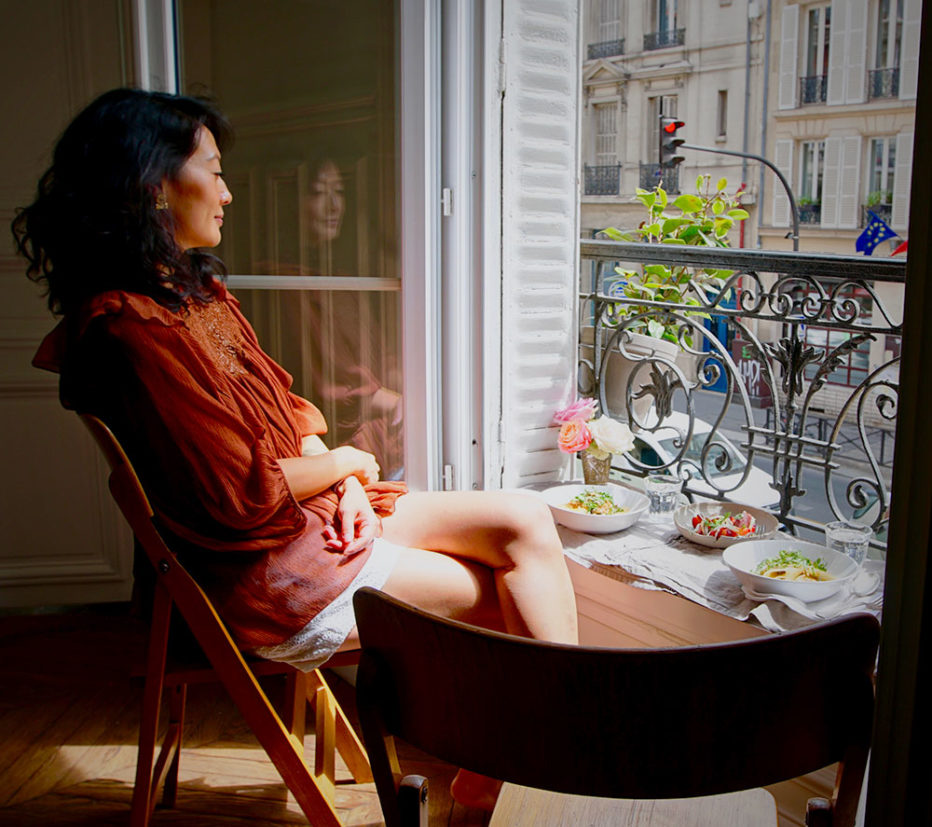 That inspiring lifestyle includes her gorgeous Lacanche, a Rully Classique, the centerpiece in her white-washed, marble-backsplashed, kitchen.

Most of the Lacanche ranges that I have seen were installed in large single homes and Ellis’s apartment is a testimony that a timeless range can fit anywhere, even in a two-bedroom apartment.

“I love that it’s not a really modern oven. You turn a nob and you have to cook with your instinct as opposed to cooking with science and technology… You actually have to look at your food, taste it, feel it, and hear it, in order to know when it’s done… I think that is how life is, you just have to go with it and be connected to it as much as possible. That is actually what I love about it the most.”

Ellis’s analogy of cooking and life stayed with me later that day as I climbed up the hill to Montmartre, to get a good view of the city. I couldn’t agree with her more. It is all about being connected and using your senses, which somehow in Paris feels easier.

Side note: there is a street in Paris called Rue du Croissant